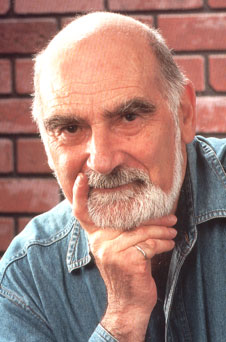 It was with great sorrow that we learned of the passing of Ted Kelsey. To millions, he will be forever remembered as Joe Grundy in ‘The Archers’. As well as a distinctive voice, he was a dedicated activist and Audio Committee member, campaigning on behalf of his Radio colleagues and of voice actors in general. He was also a lovely man. Here, Tim Bentinck and Sheila Mitchell pay tribute.

So very sad that we’ve lost our old pal Ted Kelsey. His Joe Grundy was one of the great radio voices, utterly inimitable and instantly recognisable. Tough, gruff, irascible, but with a tender heart of gold for his beloved family, Bartleby the horse, and occasionally Bert.

Some shows have ‘comic characters’ and although Joe was often written to be funny, the humour that Ted brought to it came from reality, a commitment to the truth of the man. Trevor Harrison, who plays his son Eddie, reminded me of his Steptoe-like ‘pathetic’ voice when required, along with a convenient farmer’s lung cough, to get out of anything he considered too much work.

It was a privilege and a huge pleasure to work with him when Joe and David had scenes together, and they share a birthday, which, with David’s 60th coming up, will be poignant as the first one David doesn’t share with Joe. He brought such life and subtlety to his performances, an object lesson in great radio acting.

He holds the record, probably never to be beaten, for the fewest lines ever in an episode – one word. Joe had had an accident, and when found by Eddie, the last lines of the ep were:

He still got paid the full episode fee!

I was so lucky to have popped in to see him in his nursing home just days before he died. He was his usual happy, laughing, stoic and self-effacing self, with a lovely view of cows and horses.

Ted always came into the Green Room with a smile on his face, as though something just outside had tickled him, no matter what troubles life had been throwing his way.

For so many of us, he was more than a colleague, he was a real friend, and someone who gladdened your heart to be with. He was generous, kind and thoughtful, one of the good people, and a really wonderful actor.

The Archers cast, and Bartleby the horse, will miss you Ted.

Although I probably got to know Ted better after I had joined the Audio Committee in the 1990s, I first met him in the days of the BBC’s Schools Rep where Ted was exactly as Tim has described him. He brought to every programme a reality and warmth which set the tone for the rest of us.

He had been among the earliest recipients of the Carleton Hobbs student award which enabled him to join the BBC Repertory Company where he worked with the greats of the radio world. The qualities Tim described were exactly the ones that made him such a solid rock of a Chair to the Audio Committee for so many years.

He was one of the original members of the Radio Committee, as it was called at first, and later set the tone for us all during the hard fought Radio negotiations attended by the whole committee with a strong staff representation led by the BBC’s James Lancaster. The toughest sessions occurred when we rewrote the entire Radio agreement. Together with Glen Barnham, who was the Equity member of staff in charge of BBC Radio at the time, they meticulously dissected the old agreement and led the rest of us in hammering out new clauses fit for the looming new century. Although full of steely resolution he remained rational and calm while at the same time allowing the rest of us to let off steam on some particular hobby-horse.

When the digital age overtook us he made sure that he was up to date with each new development but delegated responsibility for spearheading any campaign needed to those who spent time doing that work. He always found time for the detailed reports required from the chair of a committee at the end of the two year period in office and this despite a steep decline in health over his last few years.

Travelling became an ordeal and eventually he had to acknowledge that the journey from Guildford was a step too far. Fortunately the BBC realised his worth to them and helped with transport so that he could continue working on the Archers. This meant, as well, that he continued to fight for that cast, as the Equity deputy, at every possible opportunity and there have been many battles some of which he helped the Union to win. Chairing a committee is an art and Ted perfected that art – requiescat in pace.